Thoughts on the Acquia Certified Developer Exam for Drupal 8 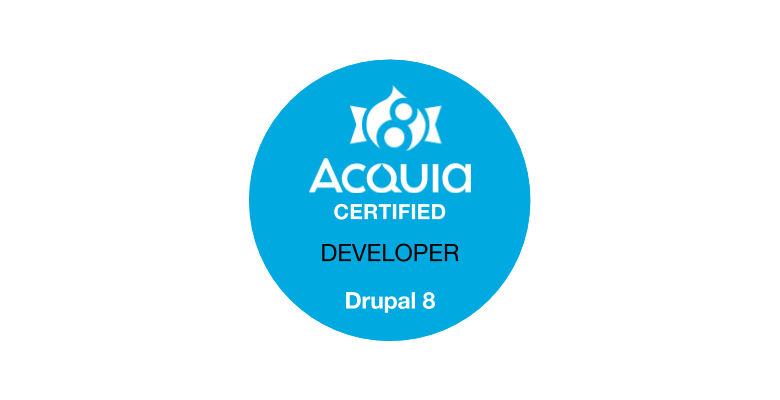 This is the third in a series of posts on the Acquia Certification Exams for Drupal 8:

In the previous post in this series, I described the Certified Site Builder Exam, the easiest of the Drupal 8 exams that Acquia offers. In this post, let's discuss their most popular exam: the Certified Developer exam for Drupal 8.

What's on the test?

The Certified Developer exam is a general purpose test that covers the topics you need to know to build a custom Drupal 8 website on your own. The exam covers building websites with the admin interface, as well custom module and theme development. The topics are wide-ranging. They include relatively simple scenarios like:

All of these topics are also tested on the Certified Site Builder exam, but there are fewer of these questions, since the test includes questions on creating custom modules and themes. The questions on module and theme development are fairly basic. If you've built a few custom modules and a custom theme or two, you've probably used all the of the APIs and techniques you need to know. A few topics I recommend you study in detail are:

I also suggest you go through Acquia's study guide for the exam. It has links to documentation for all the topics that may show up on your test. (I think the questions are randomized, so you may get different questions than I did.)

Overall, I thought the test was less rigorous than the Drupal 7 version. But, it's been a few years since I took that test, so maybe it's my frame of reference that has moved. To prepare, make sure you go through the study guide, and you will definitely want to create a few custom modules and themes.

Surprises on the exam

There were also some questions that surprised me, as they didn't focus on Drupal specifically. I got multiple questions about Git commands, including one command that isn't usually required. So, familiarize yourself with what all the git commands are used for if you don't already know. I also got one or two general CSS questions, so you should be able to identify valid selectors, and know the priority rules when multiple CSS selectors address the same element.

I also got several questions about View Modes and Form Modes. I understand the first, but Form Modes is a relatively new feature that has yet to have a lot of practical examples, so I was surprised to have multiple questions on it. That is indicative of a general pattern I saw in the test, though: The questions often read like an advertisement for Drupal 8.

I'd guess around 5-10 questions on the test were basically testing that I knew what the new features in Drupal 8 were. That makes sense to some degree, since a developer coming from Drupal 7 needs to be tested that they understand the new APIs. But, the questions I'm talking about were vague and without context. They were just testing that you knew there was a new way to do a task, not so much how to do it. This may be a result of publishing the test so soon after the release of Drupal 8, before there was a lot of practical understanding of what the most frequently used features would be.

I also found at one typo on the test, which is annoying, since the test has been out for a while. This particular question asks you to read some code and say what's wrong with it. The typo is what I first noticed since it's a mistake that will prevent the code from running, but fixing the typo is not an available answer. There is another answer that is correct, but that one is about not adhering to a particular Drupal code style standard, so it took me awhile to relent on the functional bug and pick that choice.

Which DrupalTutor classes will help me prepare for this test?

To prepare for this exam you could take our Building Websites with Drupal 8, Drupal 8 Module Development, and Drupal 8 Theme Development classes. These classes are available in the Zero to Hero bundle along with our PHP Bootcamp class. These three classes together cover nearly all the material that on this exam. The only areas we are missing are the multilingual website configuration and the general non-Drupal skills, such as Git and CSS.

If you took these courses, you would still probably need to build a few custom modules and themes afterwards to practice for the test, but our courses are a good jumpstart to gaining all the skills you need.

Who should take this test?

This test would be good for anyone who is applying to jobs or marketing themselves as a full-stack Drupal developer. (though probably at a junior-level) You would still need a portfolio of work, of course, but the test could help demonstrate a level of mastery beyond assembling modules and copying and pasting from Stack Overflow.

This test is $250, which is more expensive than the Certified Site Builder test. But it seems a lot more valuable to me. I can imagine several types of job seekers or freelancers for whom this exam could be a useful asset. It's difficult enough to be meaningful, and broad enough to prove you haven't just crammed a lot of information from one narrow topic area.

If you've never taken a Drupal certification exam and want to prove you have the general knowledge to make a custom Drupal 8 website, this is probably the test you should start with. If you're interested in learning more about this exam or registering to take it, you can do that at Acquia's Certified Developer Exam page.

Next up in this series, a review of the Certified Back End Specialist exam.